You don’t have to be mad to write comedy, but it helps. I should get some mugs and t-towels made for my merch page and become a millionaire. I recently had an email with the subject line ‘Catch 22?’ and there does seem to be an impossible and conflicting dilemma for aspiring writers. While not quite as life-threatening as a Captain Yossarian situation it can drive people to the brink. Still, I thought I would answer the query while probably failing to answer the query.

So, you’ve written something; a sitcom pilot script, short film, web series, brilliant comic feature film. You nervously send it out into the world to anyone and everyone who might just take a look at it. Chances are you won’t get many replies, but maybe one or two people respond and say nice things. If you show some promise, great potential or even generate genuine interest in your work then this is just the start of what could be a great ride. But, unless you are brilliant and lucky, it will be a bumpy one, like a comedy writer’s version of World’s Most Dangerous Roads, Ice Road Truckers or if you’re a partnership, Touching the Void.

My recent correspondent had written a web series which received some interest and nice comments from industry professionals. And you know what? That is great; it’s encouraging, someone has actually given you feedback and you feel like you’re making progress. And you are. But then… nothing. Back to square one like the worst game of Snakes and Ladders you’ve ever played and you scream and cry like a child while your competitive dad laughs smugly while he whizzes up another ladder. Then I shout, ‘It’s not fair!’ and he replies, ‘Life’s not fair.’ And I think, well okay maybe life isn’t fair but if people were less of a dick about it then maybe life would be a bit nicer. And now that I’m just as bad as my dad when I play board games, my girlfriend refuses to play Scrabble with me. It’s the circle of life.

Sorry about that tangent, but sometimes it’s good to get these things out. So, you feel there are barriers in the way of your writing moving forward, such as the fact that you haven’t got an agent when you can’t get an agent because you haven’t had anything produced. I know what that feels like, but while having an agent is great, it shouldn’t and doesn’t stop you pursuing your writing. In fact, you can waste precious time trying to get an agent when an agent isn’t going to be interested in signing you.

If producers are reading your work, enjoying it and giving you good feedback and even asking you in to meetings, but not pursuing projects further then, frustrating as that is, you just have to see it as step forward. Most industry folk do try and take time to encourage talent and even if nothing comes of those contacts now, they may do in the future. They have to look at your work and decide whether or not they have a chance of selling it and if they think that’s unlikely then they can’t afford to spend more time on it. This is particularly true if your first projects are sketches or web series. The ideas and scripts might be great, but there’s not a lot you can do with them, so you have to pursue them yourself. There are a few outlets on radio for sketches and gags but whether it’s a sketch, an online series or short film, the only way forward might be to make it yourself. And, yes, there’s probably a whole other post on this, but the only real answer to, ‘how do I do that?’ is, ‘by going out and doing it, learning from your mistakes and doing it again.’

As a new writer without an agent it is difficult to get people to read your work, but some people do and if they really love it, have time to pursue it and believe they have a chance of getting it made then they will. Those three things coming together is rare, but the issue of whether or not someone has an agent has never been an issue in my experience. In fact there are writers and performers whose scripts I have developed who have gone on to get an agent and develop a career and most of them had been through exactly this process. So, dust yourself down if you’re feeling dusty, get up again if you’re feeling Chumabwumba-y and make stuff, write more, write what you want but try and write something someone might want too. Be aware of what’s out there. Watch shows, read scripts. And one day you could be writing a blog and considering merch with snappy slogans in a foolhardy attempt to monetise it.

Just a footnote; David Quantick’s book How to Write Everything is well worth a read and will help anyone in this situation, I think.

If you enjoyed the post then you can delve further into my oeuvre and support my work by purchasing my music. The lovely Tom Robinson off of BBC 6Music says it’s good. 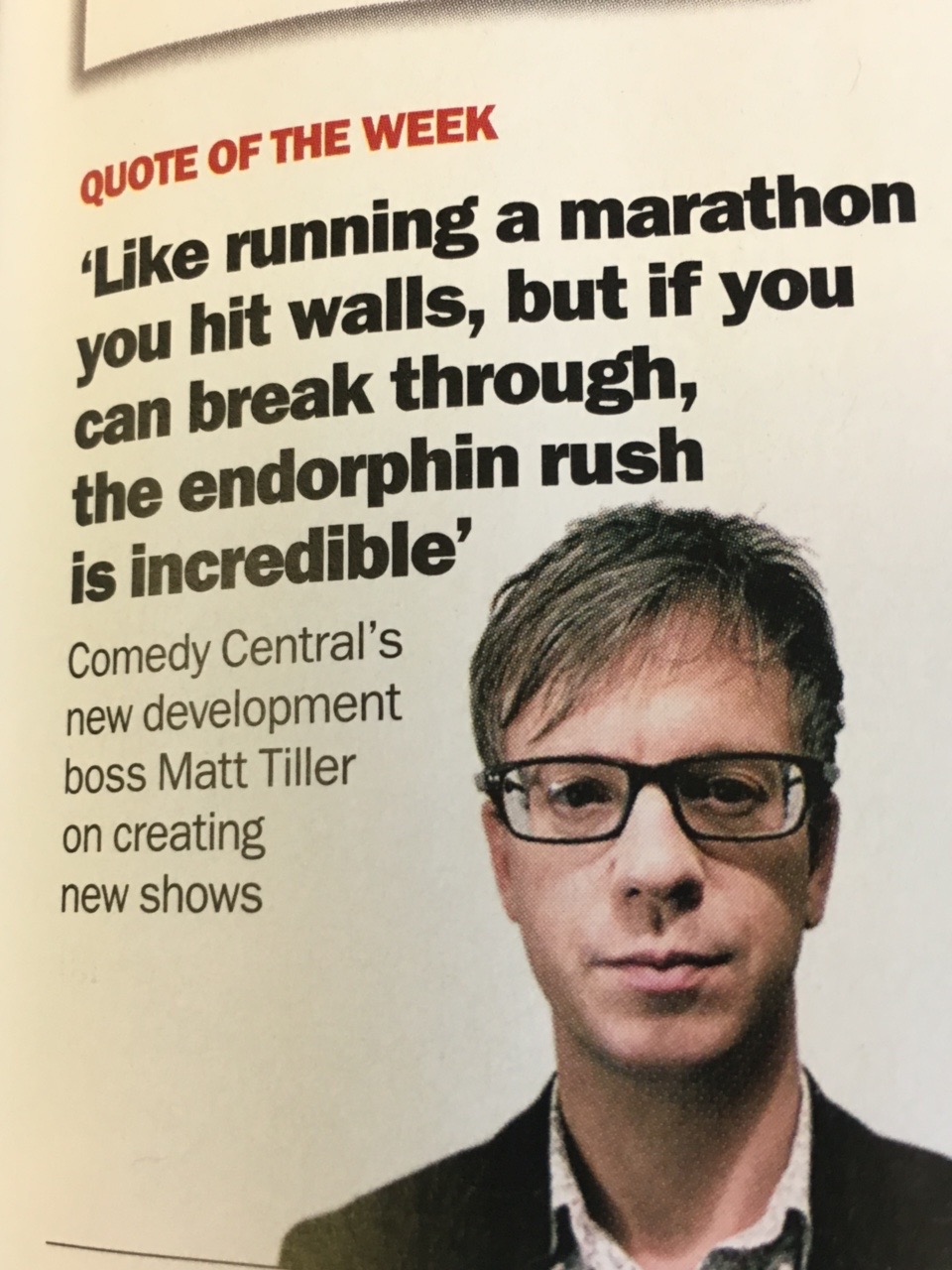