Hello. It feels like the right time to tell you some news. That sounds portentous. It’s not, I’m just struggling for an opening sentence.

I’m up to a few things at the moment on top of the usual reading, writing, developing and commissioning editor bothering. So I thought I would let you know here in the neglected news section of the website.

1) I’m working on an album. Of proper, but mildly amusing, music. Buoyed by the success of my song High as a Kite on Spotify*. It’ll feature a newly recorded version of High as a Kite alongside a host of block rocking beats. I’m also releasing the new High as a Kits on digital platforms only (because I don’t want to clog my house with boxes of CDs) on 6th November. Excited? I can feel your anticipation from here.

2) Some years ago I did an Edinburgh show about how I kidnapped the Chancellor of the Exchequer George Osborne. Which is something that absolutely happened in a semi-fictional sense. That is to say it was made up with some truths. I liked the material and one of the songs I played still goes down well when I play it today, so I am writing it as a short ebook. A novella, novelette or something. I plan to release it early December for a token cost for you to read and enjoy. It’ll be called In This Together, obviously.

I played the song at a lovely gig, Vin’s Night In, recently where audience members are encouraged to draw pictures of the acts to win exciting (wonderfully terrible) prizes. One talented person decided to do this… 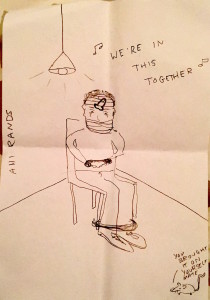 How good is that?

3) Have you tried to contact me? I get many messages on here and I do try to respond. Most people just want someone to read their script and, yes, it can be difficult. There are a couple of blog posts of mine that can help a bit – Help I Need Somebody and Infotunity Knocks – so do give them a read. As ever, you probably won’t get a reply if you just email saying ‘Hey can you read my script?’ but I will try if you’ve been polite and said nice things. Thankfully most people do and it’s really appreciated. I’ve had some lovely messages recently, so thanks for those. They’re appreciated.

I hope that’s interesting and useful. I’d better plough on through all the stuff I’ve got to do now.

*It’s had more than ten thousand streams on Spotify, which is very impressive for a little known ‘artist.’ Less impressive when you discover that the vast majority of these are coming from confused Norwegian fans of indie band Highasakite.