Something often crosses my mind. ‘How many things should I be working on right now?’. Am I diluting my unquestionable genius and creating a mushy sea of mediocrity? Or by loading up a blunderbuss with so many killer fragments and then pulling the trigger, might one of those fragments tear through the addled brain of a commissioning editor causing them to, possibly mistakenly, order a fifty-six part series? Or are my metaphors an indication of a descent into some kind of creative abyss? Only you, or the commissioning editors who are very much looking forward to my pitch meetings, can decide… 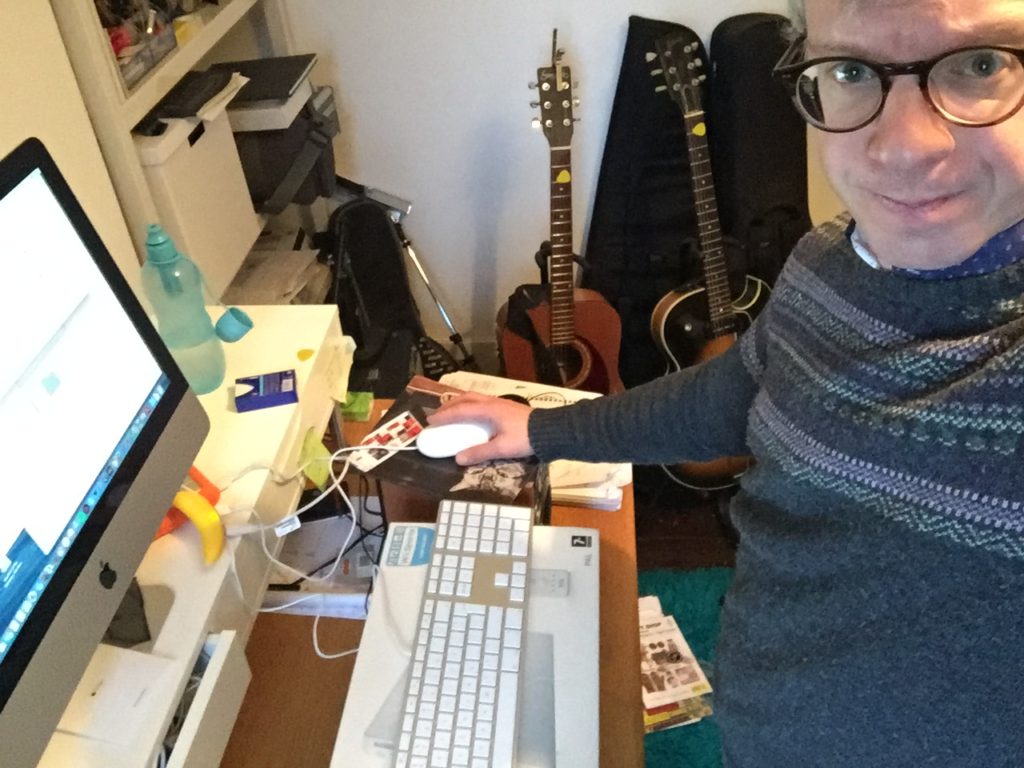 … well, taking a selfie pretending to work, but you get the gist.

I often look in the mirror and shout, ‘am I developing too many projects?’ I don’t actually shout in the in the mirror, but I do look at my reflection in an attempt to find a soul. And when I’ve found it, it’ll be available, at a price, to the devil or Channel Five.

What I can definitely tell you is that just focussing on one project alone for months and years on end is a pathway to frustration and despair. Of course you should focus on one project at a time to get it into the best shape possible to pitch, but then you should pitch it and move on to something new. Of course, it’s always worth going back to it once you have some time away. Sometimes that period of reflection can be very helpful… maybe Downton Abbey The Gameshow hosted but the CGI Paddington will be a major hit.

I’ve had a few instances where someone has been overly insistent on one particular project. Often it’s something they’ve had a bit of interest in, so it’s probably quite good. Maybe a producer said they really liked it. Maybe a commissioning editor or some other kind of highly important individual has said, ‘It’s great, but not for us right now.’ And maybe I’ve read it and thought, ‘Yeah, this is pretty good.’ But then, if no one at that moment has bought into it, it’s time to move on at least for a while until everyone has moved jobs and you can send it to someone new.1

Being passionate about something is great, but you also need to know when to move on and put that passion project to one side for a minute and slip out another one your passionate about. Do focus on things you care about, but make sure you have loads of ideas you think are ace. Or at least a handful. You want to go into a meeting with more than one, but not so many that it looks like you’re taking the blunderbuss approach. Which I think is probably a bit haphazard and likely to lead to you accidentally shooting yourself in both feet with a load of metallic fragments. Funny in a cartoon, not in real life and a frankly a stretched metaphor in both this paragraph and the entire post.

So, I thought it might be handy to let you know what I’m up to. Some of these have to be vague because I’m working on them with other people, but where I can I’ve set out the top line. Why not – are you going to nick them? I doubt it, I mean you’d be an idiot to really, just look at them…

Of course, I’m not working on all these at the same time. Some are in a position to be pitched, so I pitch them and continue looking at the others while waiting for a response, which could take months. And then if something gets some interest I focus energy on that.

Maybe that is too many, but it’s definitely good to have ideas. I could do a whole other blog about whether or not someone will steal your idea by the way. They won’t. Or at least if you’re the sort of person who worries about that then you’re not approaching it in the right way. Concentrate on getting your stuff into great shape and then telling people about it. Otherwise it ain’t never going to happen anyway.

Good luck out there. And wish me luck with my ludicrous list. I’d appreciate that.

1 Make sure you check all the references though. There’s no clearer clue to a dated script than references to Craig out of Bros or President Reagan. Unless it’s an eighties period piece, obvs.

Hello. You know when you’re living with someone, a significant husband/girlfriend or boyfriend/wife, you think something’s gone missing you often blame then when actually the story is somewhat different? Maybe you left the thing on the bus, maybe it’s in your coat pocket, or maybe you didn’t eat that last piece of your favourite cheese after all. Well, here’s a song about men being f**kwits with added cheese puns….

Having said that, yesterday I was, like, totally vexed as to the whereabouts of my headphones. And then my wife pulled a tangled web of wires from her coat pocket and put them on the table. There were four earpieces. Yes, she had taken my headphones. But then she did apologise directly using the power of speech rather than bang on about it in a song, so who’s the better person. You decide.*