‘It’s not what you know, but who you know and who you can bullshit.’

Is this the mantra that has launched me into the stratospheric position I occupy now? Yes. If you follow my advice, you too could be nominated for a regional Royal Television Society award and, eventually, even win one. Actually, Absolutely Fine, the online series I produced with Tom Rosenthal for Comedy Central has just been nominated for a Broadcast Digital Award . Things are on the up.

I’ve never really liked the ‘it’s not what you know’ line because it doesn’t reflect the work someone put in to make those contacts and get themselves noticed. Sure, there are a few people who are so well connected they’d have to vomit on the shoes of every significant person they met to fail, but for most of us creating those connections is all part of the journey. Don’t stop believing etc.

But this blog is not about that, it’s about bullshit. How far should you twist the truth in a career situation? There are times when I’ve claimed to have more knowledge or skills than I really did. I never exactly lied, but maybe I was a little economical with the truth. Or generous with the ever so slightly inaccurate.

You have to tread the line of credibility so you don’t come across like a bullshitter — and I have met a few — knowing that, if offered the job, you can do it. Otherwise your bullshit will land you in the shit which will then splatter upwards hitting a fan revolving at high speed and you’ll have a big load of shitty egg on your face as well as being sat in a big, miserable pile of it. An absolute shitfest. And that’s not what I want for you.

There’s one moment that sticks out for me at a crucial, or it seemed it at the time, point in my career.  I decided to leave the bright, seaside lights of Plymouth, where I’d been working as a Researcher then Assistant Producer (AP) at Two Four on seminal productions such as Westcountry TV’s short-lived Mad About Shopping1 and BBC One’s short-lived daytime show What Would You Do?2 and head for the bright, smoggy lights of London to work on Living TV’s highbrow, yet cruelly short-lived, offering Relationship SOS. What do you mean, you haven’t seen it?

Relationship SOS was a studio show featuring people with personal issues who were given advice by a panel of experts. We’d then see how the advice worked by filming the participants at home or an appropriate location before they later returned to the studio to discuss how it had worked.

I had to apply for the job first, of course, and being just a young boy from the Westcountry trying to make his way in the big smoke was a bit daunted — it’s kinda Dick Whittington meets a budget Nathan Barley. So, when I was invited to an interview for an AP role, I was incredibly excited.

At the interview I discovered the producers needed people with DV (Digital Video) skills — the ability to shoot these VT inserts3 as well find and book the participants. Now, while I had picked up and played with a camera and been on plenty of shoots watching directors and camera operators work, I’d never really shot or directed anything. In the interview one of the producers said something like, ‘Your DV skills will come in very handy.’ In my head I was thinking, ‘Er, what DV skills?’ But, desperate to make my mark in low budget daytime television, I said, ‘Yeah, absolutely.’

Amazingly, I got the job; a three month contract in London. I was convinced I’d be found out within seconds and ignominiously shoved on the next train from Paddington back to Plymouth with my tail between my over-stretched legs. In a bid to prevent that humiliation, I borrowed a camera and sound gear (as I’d have to be doing both), took advice from anyone I knew who’d ever shot or directed anything and practiced. I had one weekend to gain those much vaunted ‘DV skills.’

Somewhere in my disorganised archives, there’s a funny picture of me holding a camera but I couldn’t find it, so here’s a pic of me about the same age looking ridiculous with a cocktail and sporting ineffective facial hair… 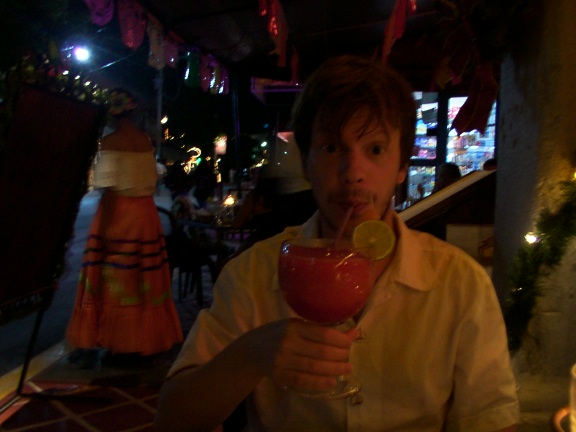 In the end you’ll be relieved to know, dear reader, that it all turned out okay. I mean, the show was absolute bobbins but somehow I managed to scrape through. By throwing myself into it and doing as much preparation as I could, the unravelling was averted. In fact, and this is a bit trumpet-blowy (while being entirely aware that I wasn’t quite following in the path of Spielberg), the producers told me I’d made the best VTs across the series. My fear of coming a cropper in the big city abated. Bravo’s Future Fighting Machines, Channel 4’s Bare & Breakfast and of course Channel 5’s Shaving Ryan’s Privates4 all lay ahead on my glittering career path…

So, yes, bullshit to your hearts content. As long as you’re prepared to put in the work needed to get away with it.

By the way, this is part one of a series of two blogs about bullshit. The next will be about why you shouldn’t bullshit for anyone else…

1 I made a pitch for the theme tune… ‘We’re just hopping / BONKERS / mad about shopping.’ Sadly, it was not picked up but I’m suing Dizzee Rascal as he clearly stole the idea.  Can’t remember what the chosen theme was, but mine would definitely have been better and turned the show into a massive ratings hit.

3  VT stands for Video Tape and is still used to describe short filmed items that are then played into a studio show – such as news reports, ‘sideways looks’ at something or other on The One Show or cringeworthy attempts at topical comedy on The Daily Politics.

4 That one’s not on my CV and I can’t quite remember if that was the title, but I definitely went to Naples (well, an industrial estate in a Naples suburb) to shoot footage for the programme, a one-off ‘documentary’ about pornographic remakes of Hollywood blockbusters. I was filming behind the scenes of a remake of Cleopatra, cue shot after shot of hilarious items obscuring intimate parts. Oh dear. It was, naturally, a huge ratings success.

Hello and a very happy new year. I hope you are excited by the possibilities and opportunities that lie ahead. Even if you are currently sat in your dressing gown typing nonsense for your website attempting to stave off the fear. Just by the very act of typing, you are doing that. I think just did a bit of ironic self-congratulation. Not sure if that’s good or not – you decide.

For the last couple of years I was working for Comedy Central where I had a great time working on a bunch of stuff like Drunk History, which is a really great show and looks incredible, and the shorts I’ve posted about with Tom Rosenthal, Absolutely Fine, which are brilliant so do have a watch…

Now I’m back working independently,  developing and writing projects all of which will definitely hit your screens at some point1.

So, here’s the plan… I’ve decided to be more open about what I’m up to. I’ve always been wary of sharing things too early, not because I worry about people stealing ideas – if you stress about that, you’ll honestly get nowhere. I remember reading a quote from a writer or producer (I think it was in David Quantick’s How To Write Everything) that the size and frequency of copyright notices on a submission is almost always inversely proportional to the quality of the writing. That rang true to me.

I can’t always give all the information, if I’m working on something with another writer then it’s not really fair to divulge it without their permission. But where I can, I’ll write about what I’m doing. I hope it’ll be interesting and useful, but mainly it’s an entirely selfish action – I reckon that if I tell people what I’m up to then it’ll motivate me to get stuff done, because it’ll be embarrassing otherwise. Expect loads of blogs saying, ‘I sent (INSERT PROJECT HERE) to (INSERT BROADCASTER OR EXECUTIVE HERE) and, ‘I am waiting to hear back from (INSERT BROADCASTER HERE).

Today I’m back to work and looking at a treatment for a silent comedy I’ve co-created. I think it’s a strong idea but it’s a bit of a re-working of a previous project. This is something that is always worth trying but it can be difficult to let stuff go. All I have to do it let all the great scenes and jokes that won’t work in the new format go. Let it go.

Sorry if you now have that song from Frozen going round in your head.

1 Okay, maybe 5-10% have a realistic chance, but you have to start with the belief that all will be good enough otherwise you might as well go back to working in a luxury fruit goods packing factory in Devon. That was my worst job ever. Worse than working in Sergeant Pepper’s Fun Pub where, on my first shift aged eighteen, a drunk middle-age woman leant over the bar while my hands were occupied pouring a pint and started undoing my trousers.

Here’s another brilliant episode of Absolutely Fine created and directed by Tom Rosenthal, co-written by and co-starring Celeste Dring. This one was tailored for Facebook, while there is a longer version with a very different ending over on YouTube.

A second series of Tom Rosenthal’s brilliant Absolutely Fine has just been released on Comedy Central UK’s youtube page. I had the pleasure of exec producing this. Tom and the cast did a great job. Here’s the first one…

Here’s a lovely video from the ace Tom Rosenthal who made these shorts for Comedy Central. I helped a wee bit, but he did pretty much everything on it. They’re great…